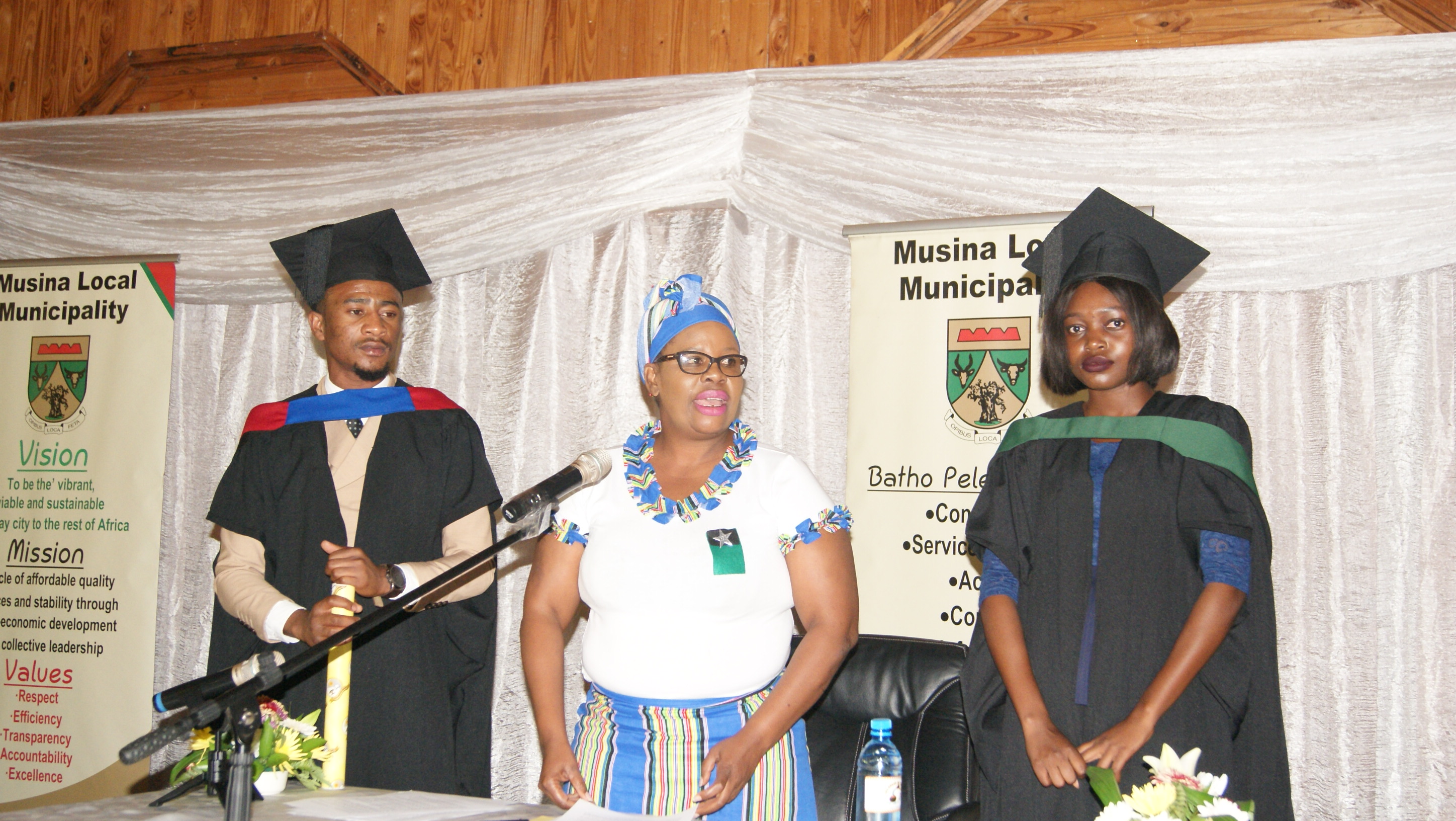 Musina Mayor, Cllr Mihloti Muhlope captured with the latest graduates of her mayoral bursary scheme. They are Lucky Nhlanhla Ntuli (left) who has completed a Bachelor of Arts degree in Local Government and Euginia Moichela who completed her BSC degree in Life Science.

Lucky Nhlanhla Ntuli  is an indigent community member who has just completed a Bachelor of Arts degree in Local Government from the University of Limpopo with the assistance of the Musina Municipality Mayoral Bursary Scheme. The future looks bright for Ntuli after he has been offered an employment service contract at the municipality. His colleague, Euginia Moichela who completed her BSC degree in Life Science with distinction, also from the University of Limpopo, has decided to further pursue her honours degree before she considers joining the municipality after graduation.

Ntuli remembers the predicament he had after completing his Grade 12. “I had no money to further my studies due to my indigent family background. Applying for funding by the mayoral bursary was my last hope as I did not get satisfactory response from other bursaries. I could not believe my ears when I was informed that the municipality would fund me to further my studies. That is why I worked hard to make sure that I don’t disappoint my funders. I’m happy that I have now completed my studies and I’m part of the municipality workforce.”

Meanwhile, Moichela was full of praises for the municipality by assisting her to realize her educational dream. “Despite the fact that I passed my Grade 12 with flying colours, I also did not have money to further my studies when the municipality came to my rescue. Though I have completed my degree, I am continuing with my honours before I come back to join the municipality on an employment contract. I urge other indigent learners to study hard because the municipality is here to assist.”

Musina Mayor, Cllr Mihloti Muhlope encouraged indigent students to forget about their poor financial backgrounds and work hard to get their qualifications. “We want those young community members to complete their education so that they can come back and help us to develop our communities. It is only through education that we can reduce poverty in our community. In the past six years, the municipality has produced a total of 15 graduates who have been placed in various departments within the municipality. We are happy that the number has now increased to 17 after Ntuli and Moichela graduated. We are presently assisting eleven students with full bursaries who are furthering their studies in various institutions of higher learning. During our new financial year which started on 01 July, we will be spending R1,8million to assist students identified from needy families.”