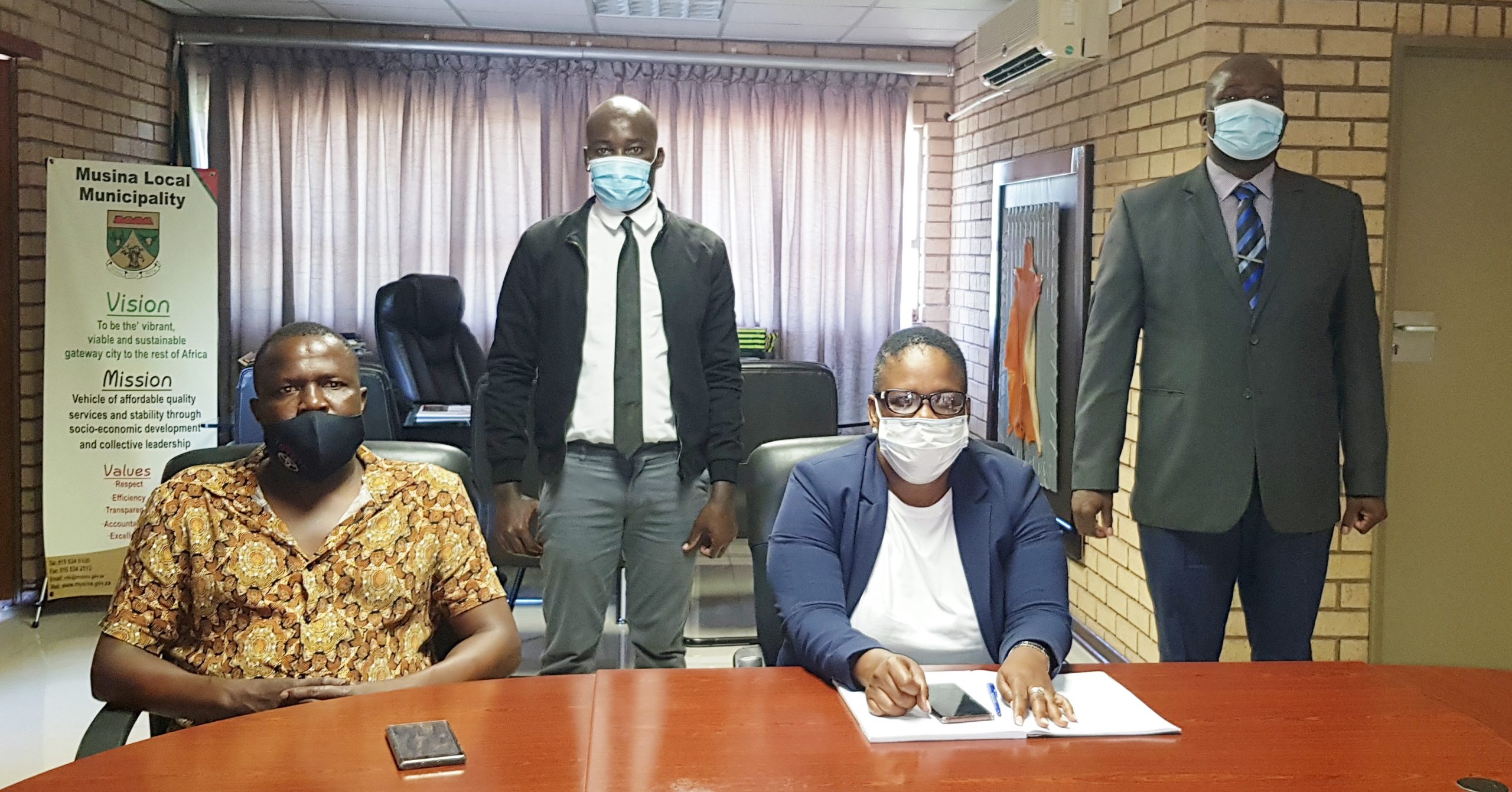 Captured during the visit by representatives of the Military Ombud in Musina are seated: Cllr Fistos Mafela (Chief Whip) and Cllr MIhloti Muhlope (Mayor of Musina). Standing are Ntshengedzeni Singo (left) and Vongani Ndleve from the Military Ombud.

The Military Ombud, whose offices are in Pretoria, is in a drive to introduce their services to the communities where there is high deployment volume of the members of the South African Defence Force (SANDF).  The representatives of the institution were at Musina where they met Musina Mayor, Cllr Mihloti Muhlope and the Chief Whip, Cllr Fistos Mafela. The Military Ombud was represented by their Analyst, Vongani Ndleve and Communications Officer, Ntshengedzeni Singo.

When briefing the politicians, Ndleve said the office of the Military Ombud was established in 2012 to investigate and ensure that complaints against SANDF are resolved in a fair, economical and expeditious manner. He explained what a complaint is: “A complaint is a written statement expressing discontent or unhappiness by a member or a former member about his or her conditions of service and members of the public about the official conduct of a member of the Defence Force. The complaint must be lodged in writing using the prescribed form. The completed complaint form can be submitted to our office through post, fax, email or by personal delivery.”

He said serving members should first try and resolve their dissatisfaction within the SANDF through the individual grievance process as prescribed in the Individual Grievance Regulations of 2010. He outlined who is eligible to lodge a complaint: “A member or a former member of the SANDF regarding his or her conditions of service can lodge a complaint with us. Member of the public can also lodge a complaint regarding the official conduct of a member of the SANDF. Members of SANDF can lodge complaints about recruitment of procedures, advertising and selection and appointment criteria, job classification and grading, salaries, allowances and service benefits, working environment and working facilities, education, training and development, termination of service, to name but a few.”

Musina Mayor, Cllr Mihloti Muhlope said the municipality will work closely with the Military Ombud to make sure that their services are known to the local people. “We have a huge number of SANDF members deployed around our area and it is important to know what they are supposed to do and what they should not do. We appreciate the good work that the members are doing to keep us safe. However, our community members will be able to lodge complaints in relation to those SANDF members who disregard their oath of protecting the community.”