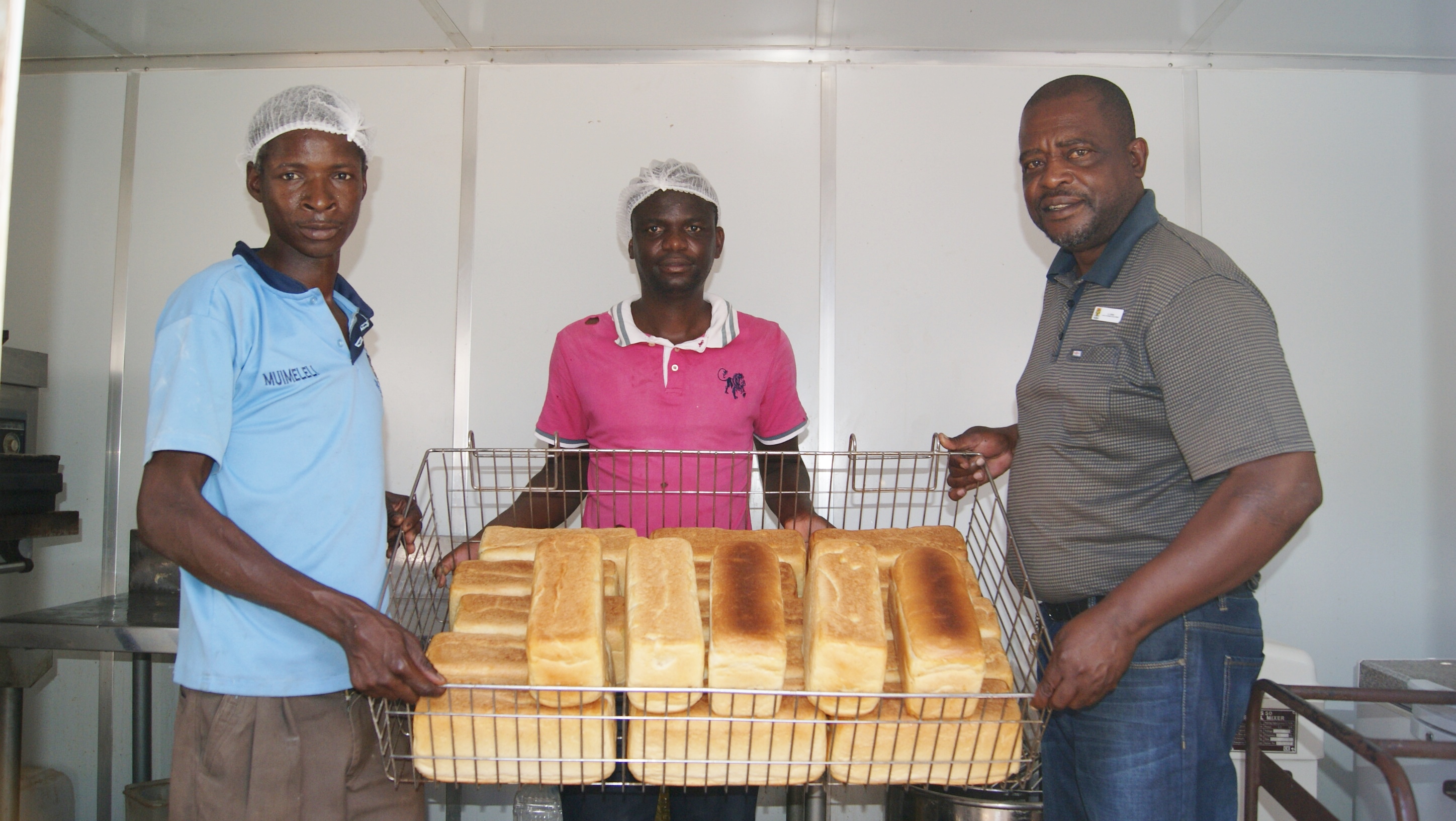 The bakery manager, Godfrey Nefolovhodwe (middle) and his co-worker, Ndiimafhi Mukhada (left) captured with the Acting Local Economic Development Manager of Musina Municipality, Itani Dzebu displaying some of the bread that was produced at Gwakwani community bakery.

The solar powered community bakery, cold storage facility and communal education centre is playing a major role in the improvement of life in the deep rural village of Gwakwani under Ward 10 of Musina Municipality.  Before the village was integrated into Musina Municipality from the defunct Mutale, it was identified as one of the villages that was cut off from the rest of the country because there was no electricity, mobile phone network and a very limited water supply. The biggest challenge which faced the people of Gwakwani, was the lack of any form of steady income because the majority of the community members depended on social grants. The village has 27 households and a population of 100 people.

After some very detailed research by the University of Johannesburg in 2014, an idea was formed to construct a solarized bakery and a cold storage facility in the village to address the shortage of fresh bread as a staple feed on daily basis and to create employment for the local community members. There is also a communal structure with an area where community members have access to a television set, fridge and also a children’s corner to help them develop educationally to help them learn. This was spearheaded by the University of Johannesburg School of Electrical Engineering and various partners and sponsors under the watchful eye of Corney Keefer, the Project Manager of the University of Johannesburg. Not only has the bakery project assisted the Gwakwani Village in building an economy, it has also assisted the surrounding villages in producing a cheap staple feeding scheme and an excellent nutrition on a daily base.

The bakery manager, Godfrey Nefolovhodwe said five community members are part of the project and they produce a total of 160 sold out loaves of bread per day. “Before the project came into being, we were all unemployed but we can at least put something on the table. Though the income is not much, we are grateful that we are working and we are able to assist our community because there is no shop in the village where they can be able to buy bread.”

He said the cold storage facility helps them to store chicken feet and other types of affordable meat that they sell to the public. “We thank the University of Johannesburg, all the sponsors and partners, our project manager Corney Keefer, not forgetting our community members who have been supporting this project with the little income they spend here.”

Nefolovhodwe says although things are looking bright, they still have challenges that need to be addressed. “We need further training on business management and advanced baking skills but we don’t have money to enroll for those courses. We are also working without uniforms and protective clothing because we cannot afford to buy them due to low income generation. We will be grateful if we get assistance from Good Samaritans out there.”

The Acting Local Economic Development Manager of Musina Municipality, Itani Dzebu thanked all the stakeholders who played a role in the realization of the project. “We are very happy that this village is slowly becoming self-dependent although there is still much to be done to improve the standard of living here. This is a clear demonstration that stakeholders can also play a role in assisting government to improve people’s lives.”

Stakeholders or community members who would like to assist or know much about the project can contact Godfrey Nefolovhodwe at 084 470 0966.